Legs have two sets of veins—superficial veins and the deep veins that drain blood from the leg muscles. Deep Vein Thrombosis (DVT) refers to a blood clot that forms in one of the deep veins, most commonly in the leg, A DVT can occur in any limb but tends to occur more commonly in the leg, involving the foot, ankle calf or whole leg. [1, 2]. DVT can partially or completely block blood flow through a vein. [2] 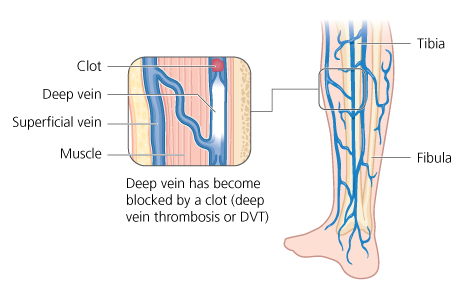 In many cases of DVT, the clots are small and do not cause any symptoms [3]. Most patients have symptoms when there is proximal vein involvement and these symptoms can include [2]:

Always talk to your doctor if you have any concerns about DVT or if you think you have symptoms of DVT.

Each year, about one in 1200 people in Australia and New Zealand are affected by VTE [4,7]. DVT became well known because of its association with flying for long periods (often called ‘traveller’s thrombosis’ or ‘economy class syndrome’), but the risk of getting a DVT is higher in hospitalised patients. Only about one in 6000 people who go on a long flight (more than 4 hours) will develop DVT [5], but if you are in hospital, particularly for a major operation or because of a serious illness, your risk of having a blood clot in your leg or lung is much higher than usual [1]. Hospitalised patients are over 100 times more likely to develop a DVT or PE compared with the rest of the community [6].

While a DVT can be treated without causing further problems, in some cases complications of DVT can occur. These include: